It seems that classic mayonnaise recipe It has fallen out of favor for the convenience of opening a can of industrial mayonnaise and for fear of the dreaded salmonellosis or that it will simply cut us off. However, where there is homemade mayonnaise, all existing and existing marks can be removed, because its flavor and texture are unmatched.

Why don’t we dare to do it more? You can live without making homemade mayonnaise, but it is a shame then, leaving aside the issue of flavor, you only need three basic ingredients and five minutes.

To get a perfect mayonnaise you do not have to control the scientific bases that work the miracle of combining egg, oil and vinegar in one being. Although understanding them can help a lot.

The miracle of combining egg, oil and vinegar in a creamy cream

Mayonnaise sauce is an emulsion of oil and water (vinegar or lemon juice). If we try to mix water and oil, not even the best mixer in the world will get them to stay together for long. The oil will come together again and be placed above the water because, although it may seem otherwise, it is less dense and weighs less than the latter. This separation is produced by the incompatibility of its molecules, apolar those of oil and polar those of water.

So that these two elements stop repelling each other an emulsifying agent is needed to attract them and hold together forever and ever. That is, you need an intermediary that is friendly with the oil and water molecules alike. This role is played by the egg or, rather, the yolk.

But this is not all that is needed to achieve a stable emulsion or a perfect classic homemade mayonnaise. So that it does not cut, the oil must be separated into small droplets so that the emulsifier is able to surround them and, assisting them, get them to join the water. Great, but how do you do this?

The trick is in pour oil on top of the egg and do not move the mixer from the bottom of the container until it begins to emulsify. Why? Well, because this is what what we just mentioned achieves. The lower part of the oil separates into droplets and mixes with the yolk, thus forming the first part of the emulsion. Once it begins to thicken, we can move the mixer up and add the rest of the oil.

Mayonnaise can be made with any hand mixer, although it helps to have one.sufficiently powerful and stable, with a power of at least 750 watts.

Although we are going to prepare the sauce in the glass of the hand mixer, we start by cracking the egg in a separate container. This helps us to check if there is any rest of the shell and avoid possible salmonella contamination, because it is in the shell where this bacterium is found.

We transfer the egg to the blender glass and add the salt, vinegar (or lemon juice) and half of the oil. We place the arm of the mixer inside, touching the base, and begin to beat at low power. We do not move the mixer until the mixture is emulsified, then (only then) add the rest of the oil and lift while continuing to beat until the desired thickness is obtained. 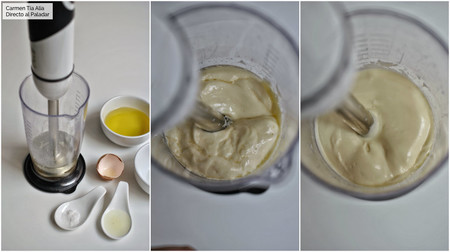 How to preserve mayonnaise

If we do not consume all the mayonnaise at the moment, we can keep it in the refrigerator, inside a closed container, for up to two days. When carrying raw egg, it is not advisable to go beyond this period of time, even if it does not smell bad and we think it is good. After two days, we discarded it.

How to fix a cut mayonnaise

With the technique that we have just explained, mayonnaise is not usually cut. If it happens, fixing a cut mayonnaise is possible and very simple. In the blender glass, add an egg yolk and add a couple of tablespoons of the cut mayonnaise. We beat in the same way as if we started from zero until emulsifying. Then we add, little by little, the rest of the mayonnaise cut and continue beating until it is ready.

Subscribe to receive our recipes, nutrition information and gastronomy news every day.

With what to accompany the classic homemade mayonnaise sauce

If you are one of those who, like me, are capable of eating mayonnaise by the spoonful, you may not need to add more in this section. The classic homemade mayonnaise It is a sauce that goes perfectly with fish and vegetables, but also with meats. In some recipes it is a classic, such as the Russian salad or the Malaga gazpachuelo, which provides a very special touch of flavor.